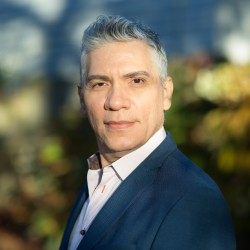 Born in Belo Horizonte, Brazil, Rogério M. Pinto focuses on finding academic, sociopolitical and cultural venues for broadcasting voices of oppressed individuals and groups. Funded by the National Institute of Mental Health, his community-engaged research focuses on the impact of interprofessional collaboration on the delivery of evidence-based services (HIV and drug-use prevention and care) to marginalized racial/ethnic and sexual minorities in the United States and Brazil. Pinto conducts art-based scholarly research. He performed “Marília,” a one-person play, on New York City's Theatre Row in 2015 and at the University of the Free State in Bloemfontein, Vrystaat, South Africa in 2016. “Marília” won the United Solo Festival Best Documentary Script. In “Marília,” Pinto explores the tragic death of his three-year-old sister and how it haunts and inspires the family she left behind. Funded by the University of Michigan Office of Research and several other sources, he built the “Realm of the Dead,” an art installation to investigate his own marginalization as a gender non-confirming, mixed-race and Latinx immigrant. “Realm of the Dead” was presented at the School of Social Work as part of its Centennial celebration in 2021. He was also recently appointed the Berit Ingersoll-Dayton Collegiate Professor of Social Work.